The search for a letter turned into giant spring cleaning 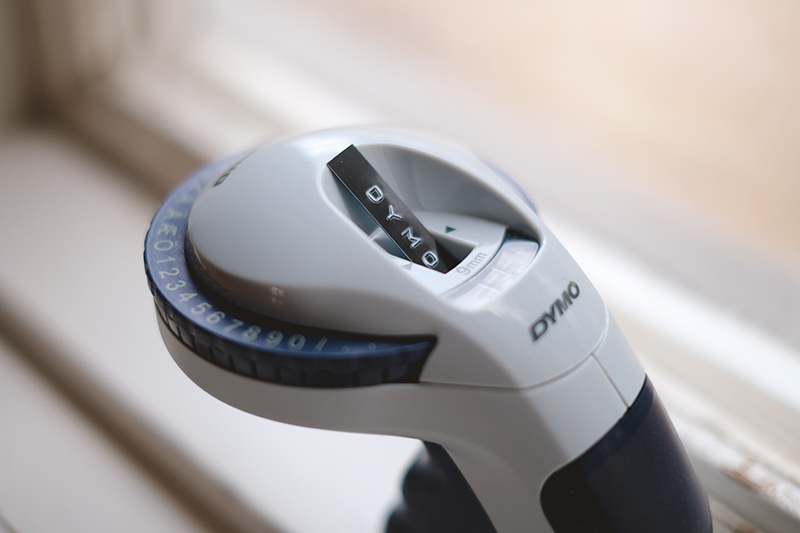 A few weeks ago, I got an unexpected request about a letter from Brenda Spencer who I wrote when working on the book “I don’t like Mondays“. Very sure that I had kept the letter (I keep all letters that I get and this one was especially important for this project), I thought it would be a matter of checking a few boxes.

At that point, I seemed to have forgotten the rush in which we packed and the chaos ruling my workspace. Our tactics for moving were perhaps a bit unusual. We had unexpectedly found a place in Sweden with the help of some friends while I still had a very intensive internship to finish in Belgium all the while one of my senior dogs needed surgery for cancer. The internship went great, Ravasz recovered (and lived a few more very happy years), and we decided to move in December, only a few days after the final presentation of my project. We had thrown some things in boxes and moved a few practical things like furniture abroad in summer, but that caused a bit of confusion on what to take, what to leave for the next round. Winter isn’t the easiest moment to move and we had to think about the comfort of the dogs too, so after getting the most needed stuff, we left some items in storage and we’d pick some boxes up every time we visited Belgium.

Most of the boxes that were meant for my studio were never unpacked. I’ve been searching for paper out of boxes for a few years now- yes, very annoying! The reason for this is that we planned on fixing the space (which is now two small bedrooms and a large but very dark hallway with plastic floors that are coming off), but unexpected events threw a spanner in the works. From work people who promised to stop by and only call an hour after they should be at our home that they are abroad and not going to make it to a pandemic and a sick architect. This winter, I was so tired of this unpractical room that I decided to take out what I needed, occupied the kitchen ever since, and used the room as storage :-).

Overlooking the chaos and desperately wanting to find the letter, I decided to start organizing everything. All my materials from paper in different sizes to paintbrushes, oil paint, ink, knives, gauges, … all of it! Joeri ordered a bunch of plastic boxes at Ikea (we’re in Sweden after all), and a good old-fashioned Dymo to label it all. Strangely, it was very satisfying to see all my materials neatly organized and labeled. Too bad the letter didn’t show up. I think the box of this project is still in Belgium in storage and there is no way to get there now.

Because I was looking for something specific, I didn’t start with a room in mind, but rather with all the boxes and locations that made the most sense for finding it. I also decided on plastic boxes because I will have to move everything around when the renovation starts and I think many items are the easiest stored in these boxes too.
When starting out, it felt like pure chaos. I had boxes, a trash bag, a cardboard box for the paper to recycle, and things ALL OVER. But the key is to just pick up item after item and putting it in the right box. That famous line of questioning if an item “sparks joy” was just not of any importance. This was about my work gear, paper, tools, and more, of course, they spark the greatest kind of joy in me. Even without being pretty :-). So no minimalism when it comes to my studio. Perhaps I don’t need pink pompons now, but no way I’m throwing them out! 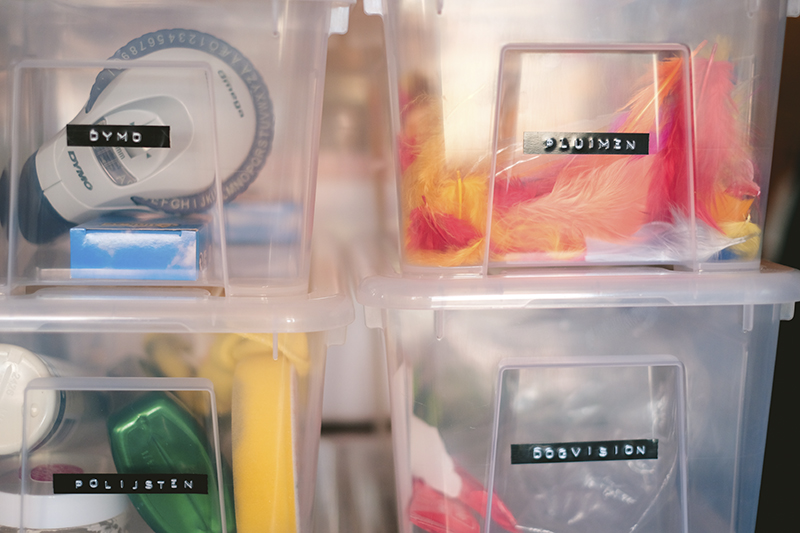 – All the boxes are from the same series so they fit when stacking. They are transparent so I can see what’s in there. Before, everything was in cardboard moving boxes which are a much better shape but they don’t seal at all, and when we’re working on the roof and on those rooms, I want to be able to move the boxes temporarily to the cabin or basement. I’ve made the mistake a few times of buying just one or two boxes and in the end, it looks messy and nothing fits 🙂
– We got enough boxes of different sizes and heights. For all the materials, I consider how I use them and how often I would have to reach for the boxes. My large paper is in a flat XL box, while the ink is in a small, easy to carry version.

– At first, I had all things about “painting” together in a large box, but quickly realized that it makes much more sense to divide oil paint, acrylic paint, and aquarelle as well as brushes and inks. It did, however, made sense to me to have both knives (for woodworking) and gauges in the same box.
– Since drawing often requires different kinds of tools (and I like mixing things too) I have a box with both pencils, colored pencils, and charcoal. The erasers are in a different small box that hangs on my wall so Joeri can find them too. I only have 1 good sharpener so that’s on my table with the daily used items.
– Most craft supplies sit together in a “Craft” box, but feathers, wooden pieces, and wool all have their own box because they are very specific.
– One box is “varia”, all the silly things one keeps in a studio space and might hang on the wall, but that have no real place now. A few items like an old camera, I hung at the cabin as I feel inspired by these things when working.
– I try to keep the boxes light, although the ones with paper will be a challenge to move. But rocks, for example, are organized by type. I have crystals in another box than quartz pieces and bergslagssten. The collection of Denmark that I want to tumble has its own box.

Once I saw all my materials from photo props to inks or feathers in such clean boxes, it sparked the spring-cleaning-urge in both of us. While I continued with a quest to organize all the drawers, Joeri started cleaning out his tools in the basement. 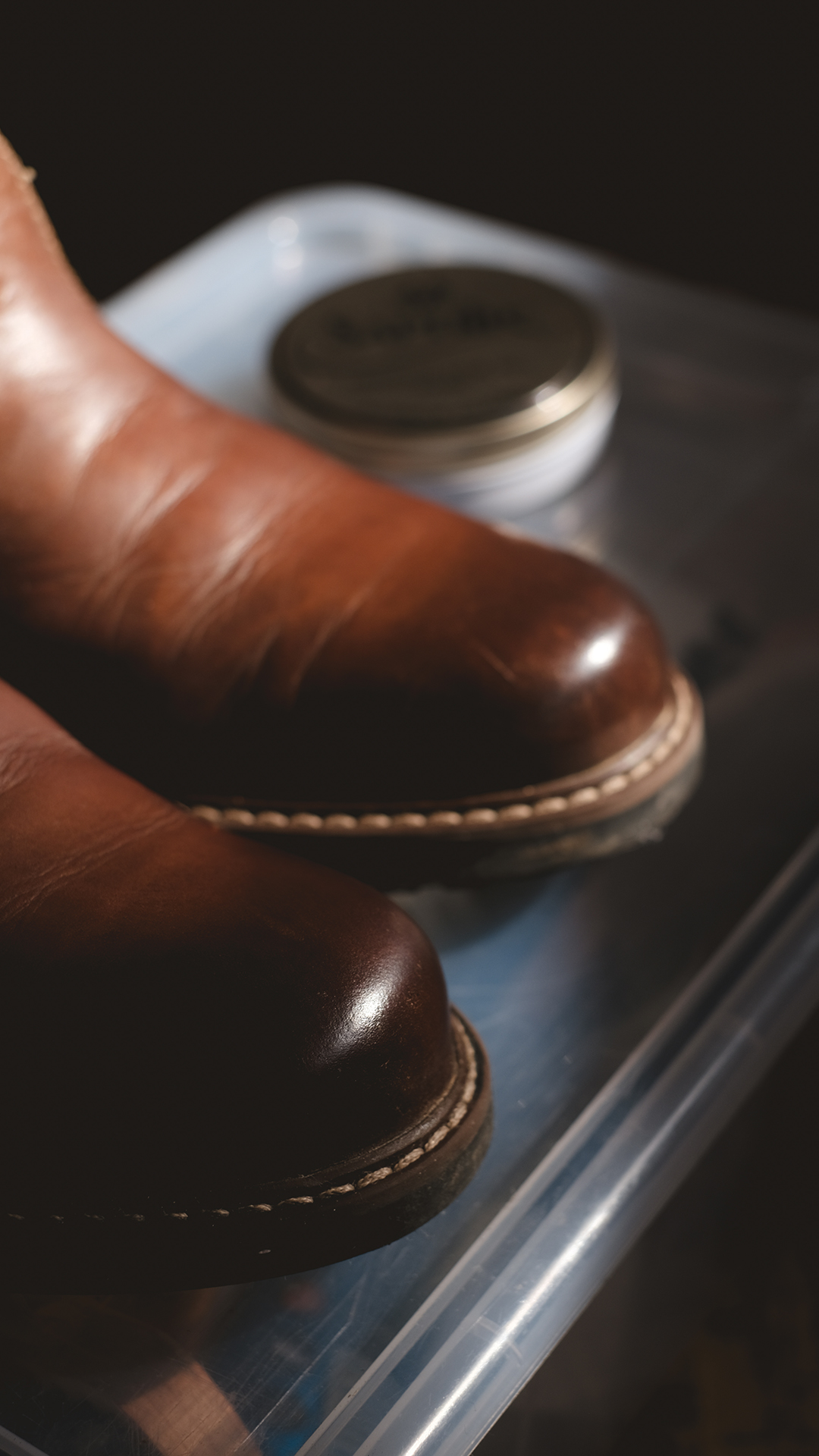 At night it’s still freezing and some days we get a bit of snow, but the real winter with the super cold days is behind us and spring is slowly making an entrance. So time to make some space and put away winter boots, and snow boots. As odd as it might sound, I find cleaning and polishing boots and shoes very satisfying :-). Look at that shine! The leather boots get filled with paper and/or a shoe tree and go in their boxes so that they will keep their shape.

On a bright and sunny day, I even cleaned out my entire car! The outside still looks like it has been through a sand storm but the inside is all clean and fresh.

Big winter coats are probably next in line to get stored, but we’ll wait a bit for more stable weather. In the meantime, Joeri has painted the basement wall and started preparing the shed to turn it into his woodworking place later.

Step by step, day by day we get a bit more organized, but it’s mostly a relief to know that all my art supplies are in clean boxes and that when the day comes that we start working on my studio and the roof, I am ready.

And now, I’m waiting for which labels Joeri needs because I’m having so much fun with this Dymo!