In the last few months, I haven’t watched much at all, but by doing some research for a project, I stumbled upon some of my favourite childhood books: the famous five by Enid Blyton. I have them in different publishing years and even in different languages as I thought they’d be fun but not too impossible to practice Swedish :-).

Even by just picking up these old books that I had read so many times, all the memories came back of living through these adventures. Oh, I love adventure stories with treasures and smugglers and islands! Pretty sure that these books are te reason I love to search for treasures and caves 🙂

While books give you the opportunity to imagine the world of the characters yourself, it can be very interesting to see how different directors and actors translate these stories in movies and series. And I have to confess, I have never seen them!

–1957.
I haven’t found the entire film and it’s not exactly on Netflix so for now I’ve watched some bits and pieces while being both surprised and charmed by the 50s way of filming and storytelling.

– A second film adaptation should have been made in 1964 but I haven’t found it yet.

–1969: De 5 og spionerne- Danish movie adaptation. It’s still on my watchlist but I was especially charmed by the joie de vivre of the opening scene which feels very nordic. From the short clip, it seems like Timmy is a German Shepherd and George has the shortest hair of all the adaptations.

–1978: Famous five 1970s tv series. I think that this is the only version that I had a look at before. I’ve seen an interview in which the actors praise the transformation of the characters to the 70s vibe but when I saw this in the 90s, it felt a bit weird. As a child, I would probably enjoy a historical setting more than this (then) in between really old and modern. When watching it now, some things I like, some not. This time it’s not the costumes that bother me but the odd jumping storyline that mixes different books together. For some of the books this was ok, but when I saw what they made of my favourite book (Five run away together), I felt upset. There was no kidnapped child (instead you get a vague assumption of a criminal on the island), there was no cave (!!), and some scenes or solutions don’t seem to make sense. Perhaps because some of the side characters never get much screen time to build up the story- they mostly appear looking sneaky. You know right away the good guys versus the bad guys. Timmy is a fluffy Border Collie in this one. Also, these kids seem to scream the whole time.

– 1995: Famous five 1995 TV series. This series is the only one that returns to the 50s as the setting of the series and I think the first one with a bit more humour and a few eccentric characters. In the other adaptations, we see a lot of interchangeable men in suits, but in this one, both the father as some of the villains are quite unique and sometimes funny. I also think this is the period that night-vision got very popular 😀 :D.

–2008: Famous five on the case: The only animated series so far, I think. And also the only one where the main characters are the children of the original famous five. The dog is again an Australian shepherd kind of dog.
I plan on watching the entire episode just because it’s part of the Famous Five adaptations, but man I disliked this version. The characters are hard to understand, have super high-pitched voices, and every move is an exaggeration of normal life. They can’t just get off of a boat but salto off, they don’t just ride a bike through a field, they slide in between cows. Come on. I guess they wanted a bit of the manga style of action but it just feels clumsy, stiff, and fake. The animation and colors are hideous and flat.

–2012: Fünf Freunde. This German adaptation feels suddenly way closer to home when it comes to the characters and cinematic style. In the storyline, you still find all the exciting elements as caves and shipwrecks but placed in a modern time. There is some use of modern technology but not to the extent that it becomes a gadget movie. The charm is much more in the great choice of location, set design, and the energy between the characters while suspense is built up.
I think Timmy is an Australian shepherd in this one and the one thing in which filmmakers didn’t grow is the number of times they insert dog sounds into a movie- as if we don’t know the dog is there.

With the same cast, they made a few other films that I haven’t seen yet, but they look kinda… too much and unbelievable? The cast is suddenly older and instead of simple smugglers and hiking, they end up in jungles and deserts. 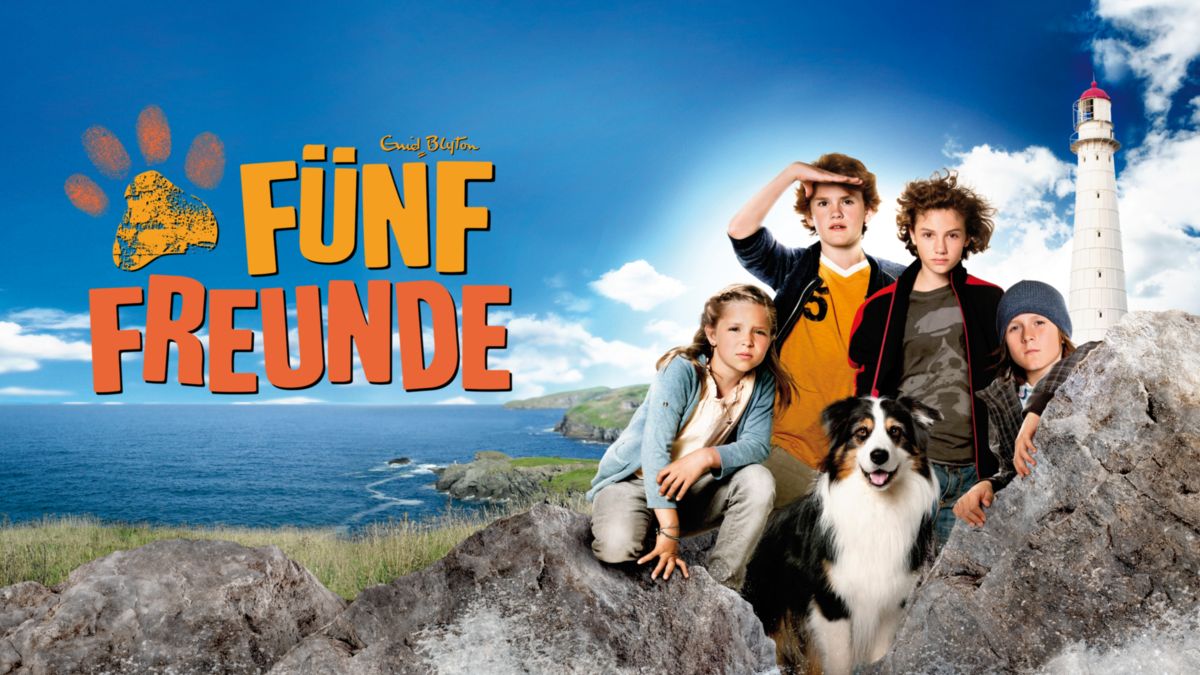 – 2018: Fünf freunde und das tal der dinosaurier (famous five and the dinosaur valley). Perhaps this movie adaptation of the characters (not the books) is my favourite so far. At first, I was a bit unsure about the dinosaur part as it was far from the original books and sometimes filmmakers get a bit too happy about special effects so that the storyline or characters get lost. But not in this one. Although characters of a children’s movie, they felt unique, interesting, and entertaining. Unlike in some other stories, the adults are not just away or not responsive, they are part of the story and the mystery. Again there was a bit of use of electronics but as a tool here and there, not as a cheap way to solve the mystery or to get more fast shots. A large part of the movie they have no phone connection due to being in a forest far away that you can only reach with a guide- a smart way to maintain the suspense and use some old school mystery solving.
Timmy is again an Australian shepherd that barks way too much- that was my only issue 🙂