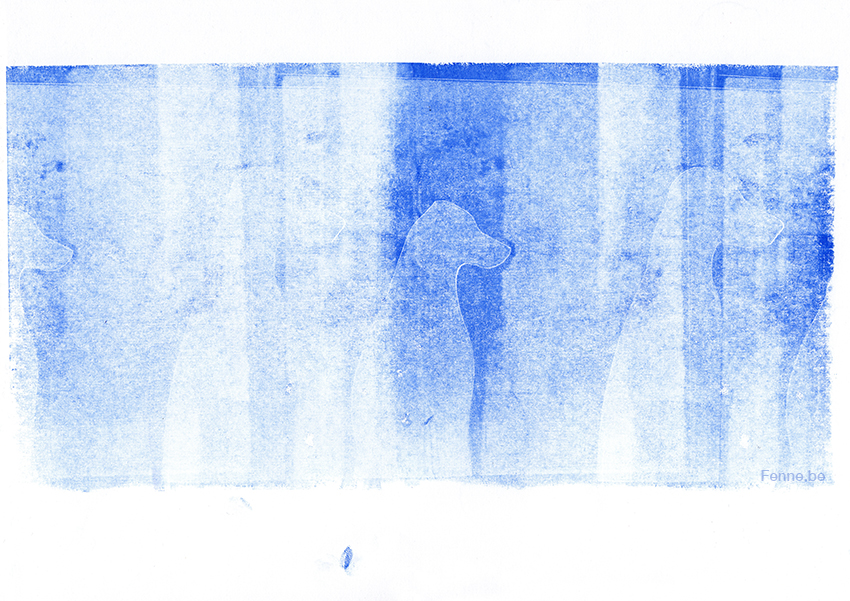 Even when you expect it in some way, having to say goodbye always comes as a shock. Suddenly any later, any plans or dreams get canceled and although I couldn’t imagine a life without any of them, the world kept turning. The snow would fall and fade out the colors, the seasons would change, the gossip would keep rolling around in the dirt. Some days I watched it like an outsider would flip a snow globe upside down, other times I would be in the middle of the whirlwind.

As an illustration, I chose to remember my dogs, my two old buddies of 13 and almost-15 years old and both considered a member of our family but by others often perceived as replaceable. Both of them died in the same two years as both of my grandmothers who I loved deeply. I’m not sure why, but I had the idea that grief would be like a big black hole that would swallow and crush me. An endpoint of some sort. Perhaps I expected that I wouldn’t find any meaning or enjoyment, that the world would be stripped from its sparkles and bliss. It’s probably a good thing that I didn’t give it any thought until I looked back at the past two years and see how much my life has changed, how much unexpected joy there was despite the hole in my soul, the tears and the goodbyes. There is a clear before and after but at the same time the regular struggles of deadlines, the challenges of learning a new language or getting used to a new country and the normal ripples of life that I would still define as happy and meaningful.

When reading about grief it’s often about depression, about guilt and anger but I can’t really relate to that as it shows just about one side. It gets divided into stages, normal versus abnormal grief and expected durations. Despite grief probably being the number one thing that all humans will experience in some sort of form as it’s part of our lives, lots of articles write about ‘symptoms’ like it’s some kind of disease. Yes, grief has a tremendous impact, but nobody needs any numbers to go with that. Wouldn’t it be great to just show up for another person instead of demanding that they would move on? Wouldn’t it be more logical to give each other the space and time for grievance? Wouldn’t it make more sense to give it more attention and thought in our society?

In the quiet space that I created, I found even more reasons to enjoy every moment possible. A cup of hot chocolate, a morning dive in the sun, doing absolutely nothing, wandering around the forest for hours or a lovely message from a friend (or even better: real mail!)… I put much of my energy in photographing my dogs and creating moments. I noticed a limited need for social interactions and even less than normal interest in doing the things I’m supposed to do out of social obligations. I found that grief gave me a good bullshit-filter and also a lack of patience to go with that as some might have noticed. It’s not just the satisfaction of doing what you want but rather listening to your mind and body to find out what you need. Just like on a summer day, now and then there are clouds sliding in front of the sun, even periods of rain and thunder and pure despair. I missed them. All of them. Those moments I avoid looking at photographs and left the world on the doorstep. Other days I’d dance in the rain, dive into blue lakes and smile all day long.

Sometimes  I pick up sentences from strangers with an opinion. About having fun when another life ended, about who/how/much/when/… one has the right to. An ignorant attempt to pilfer and intrude the inner world of others. Finding the joy, living the moments, it doesn’t mean that I forgot. It simply means that I’m (still) alive and that my heart continues to beat the drum of curiosity- also for those that I had to leave behind.

Instead of a big black hole, I found that this period of grief is more like floating on tricky quicksand with a nice warm sun on my face. However strange that might seem.