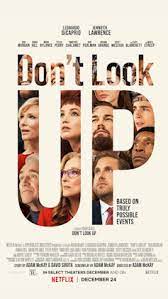 When Meryl Streep plays a role, I’m in. It’s as simple as that. This movie might not be for everyone, but it’s rather one to watch in a quiet moment and with an open mind that can find the beauty in the slowness and the gentle development of characters and details.

I think Netflix heard me joking that I could really use a “Death to 2021” (last year we watched Death to 2020) because shortly after, it popped up in my suggestions. Right in time after a week of cheesy holiday movies and popcorn- we were ready for another round!

Don’t be too distracted by the title, this interview/podcast isn’t like ‘5 reasons why you should delete an app’.
Cal Newport researched and writes about digital minimalism, deep work, the effect of social media on our brain/ daily life/ work, and in this talk he walks us through some of his findings as well as tips and strategies to stay in control of our lives.
His books, I can highly recommend, but if you prefer a podcast or short-form information, this might be your thing.

When I first saw reactions on this movie go around on Twitter, I thought: “I’ve had the 90s with their Armageddon type of movie nonsense, no thanks”. And while Leonardo DiCaprio certainly has some nice roles, I’ve never been one of those girls that would go and watch Titanic 8 times in a row at the movie theatre, let alone be all giggly about him. Things changed when a trailer showed Meryl Streep and Twitter mentioned satire. Aha! Now we’re talking.
Quite unexpectedly, this movie left us speechless for a moment and in a weird mix of lol + I might need to switch my water for vodka. This movie is genius. An extremely well-made razor-sharp portrait of our time.

Many movies had appeared on TV starring Robin Williams, but it was “Good Will Hunting” that made a difference to me. It was through that role that I could appreciate the madness of comedy better, but I was probably also getting to an age when I could see the actors behind the characters.
The documentary is a few years old, but only now did it cross my path and I’m glad it did. I think with every documentary about a well-known person, there is a lingering want for more. Some questions that didn’t get an answer. Some highlights that didn’t make the cut. At the same time, I’m thankful for a glimpse of lives that have been lived in such a rich and vibrant way. Because in daily life, most people are boring sleepwalkers without hopes and dreams, let alone actions and visions. In daily life, I’m too often surrounded by people who say no before they might think about yes, people that want you to tais-toi et sois belle (while eating tasteless pastries and dancing around a pole like a frog).

1. Corona Commission scathing criticism of the Swedish Government and the Public Health Authority for treatment of the elderly.